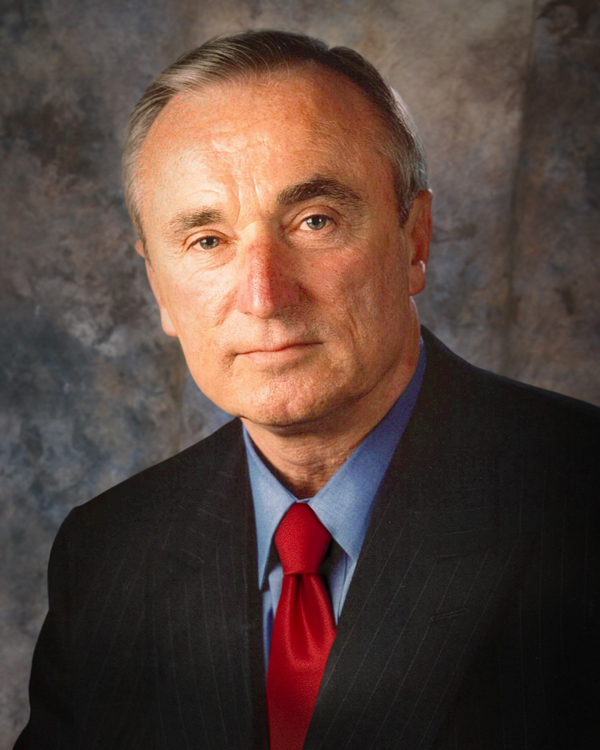 William Bratton, President and CEO of The Bratton Group LLC and Senior Advisor of Kroll Advisory Solutions of Altegrity, Inc.

In a recent message to the College of Professional Studies community, Dean John LaBrie shared who will address the fall 2013 graduates:

I am excited to announce our 2013 fall graduation speaker: Mr. William Bratton.

For those of you who may not know, Bill Bratton is an impressive leader, entrepreneur and instrumental public figure in the security field and in our nation’s top police forces. Bratton’s decades-long career shows that with hard work, determination, and perseverance, one can rise through the ranks and effect change in the world.

Bratton started his career here in Boston, as a police officer, in 1970. He later rose to become one of America’s premier police chiefs, holding posts as the Chief of the MBTA Police, Superintendent of the former Metropolitan District Commission Police, Chief of the New York City Transit Police, Boston Police Commissioner, Commissioner of the New York City Police Department (NYPD) and the Los Angeles Police Department (LAPD) – revitalizing police morale and cutting crime significantly in all six posts. I should also note that Bratton is the only person to have led police forces in the United States’ two largest cities: Los Angeles and New York. A recent editorial by The New York Times couldn’t have put it better, noting that he is the “guru of innovative policing.”

Today, Bratton is President and CEO of The Bratton Group, which he founded in 1999, and is Senior Advisor of Kroll Advisory Solutions. Given that security today is a global issue, his company consults on safety and security issues not only throughout the United States, but on four continents, including extensive work in South America. Most recently, Bratton was named as a news analyst for NBC News, specializing in commentary and analysis on issues in criminal justice policy, domestic intelligence gathering, and the role of law enforcement in counterterrorism. Bratton also recently launched Bratton Technologies which operates BlueLine, a closed professional social media network for law enforcement personnel. BlueLine helps officers share information in a public forum, fighting crime on a collaborative and national level.

Originally from Dorchester, MA, Bratton is vice chairman of the Homeland Security Advisory Council, whose members provide advice and recommendations on a variety of homeland security issues to the Secretary of the U.S. Department of Homeland Security. In recognition of his contributions to national and international security in 2009, Bratton was recognized by Her Majesty Queen Elizabeth II with the honorary title of Commander of the Most Excellent Order of the British Empire. In 1976, he was awarded the Schroeder Brothers Medal by the Boston Police Department, their highest award for valor.

I’m thrilled that Bill Bratton will be addressing our fall graduating class. Please join me in welcoming him to the CPS community.